Travel on the Cote D'Azur 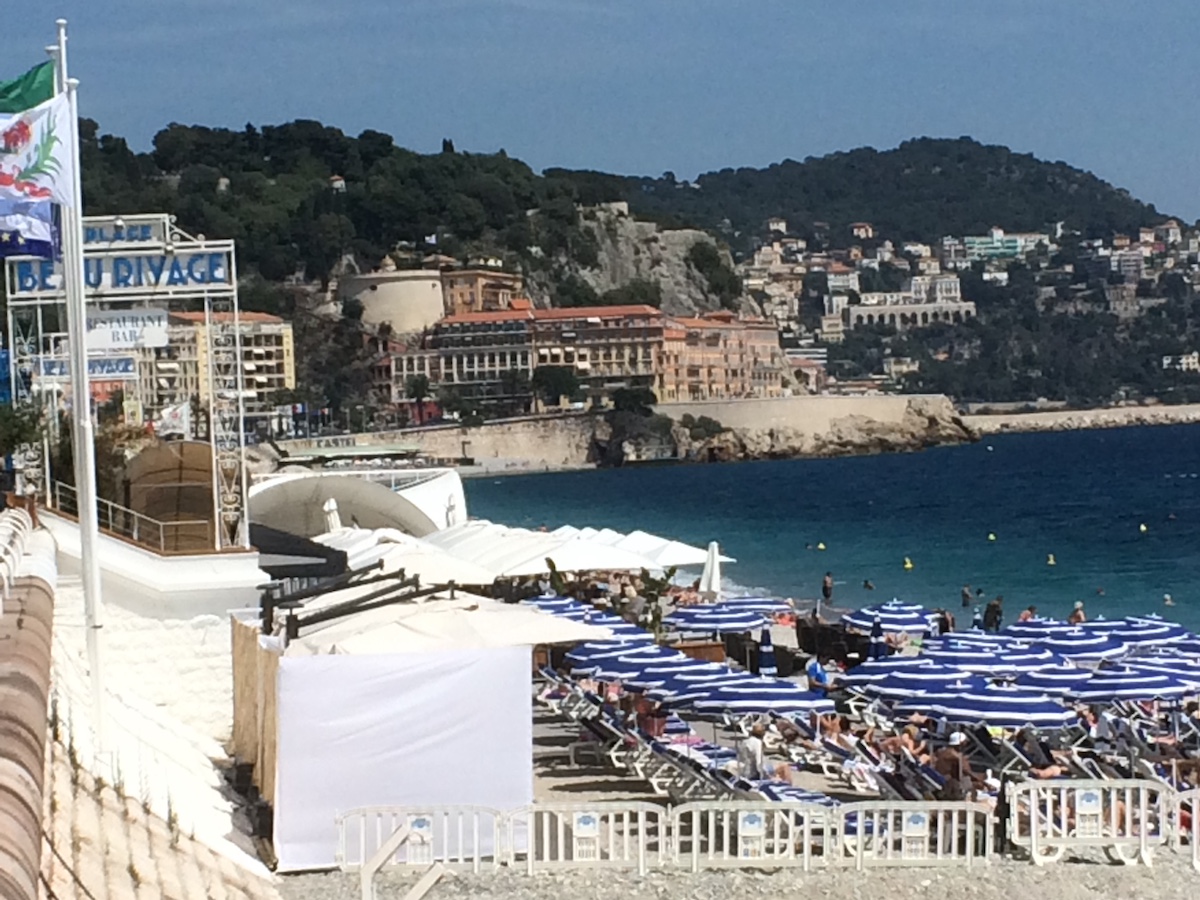 The fun in the south of France began in Nice today as sixteen ladies arrived from Canada, the United States and Australia. They will spend the next twelve exciting days with my good friend, Deborah Bine aka Barefoot Blogger, and me. 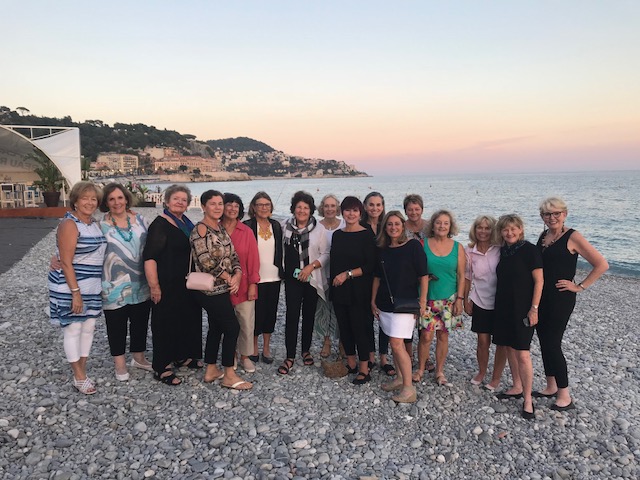 Day #1 ~ Dinner on the beach kicked things off tonight, with a delicious meal at the Plage Beau Rivage .

A perfect Côte d’Azur evening was the best reward after arduous hours of travel. The journey from Melbourne, Australia, to Nice was definitely the longest. So much fun getting to know everyone!

We hope you will follow along as we visit some of the beautiful historic and charming locations I write about in my novels and Deborah blogs about.  Thanks to the awesome Nancy McGee of Absolutely Southern France travel agency for putting all of our details into such an impressive package. 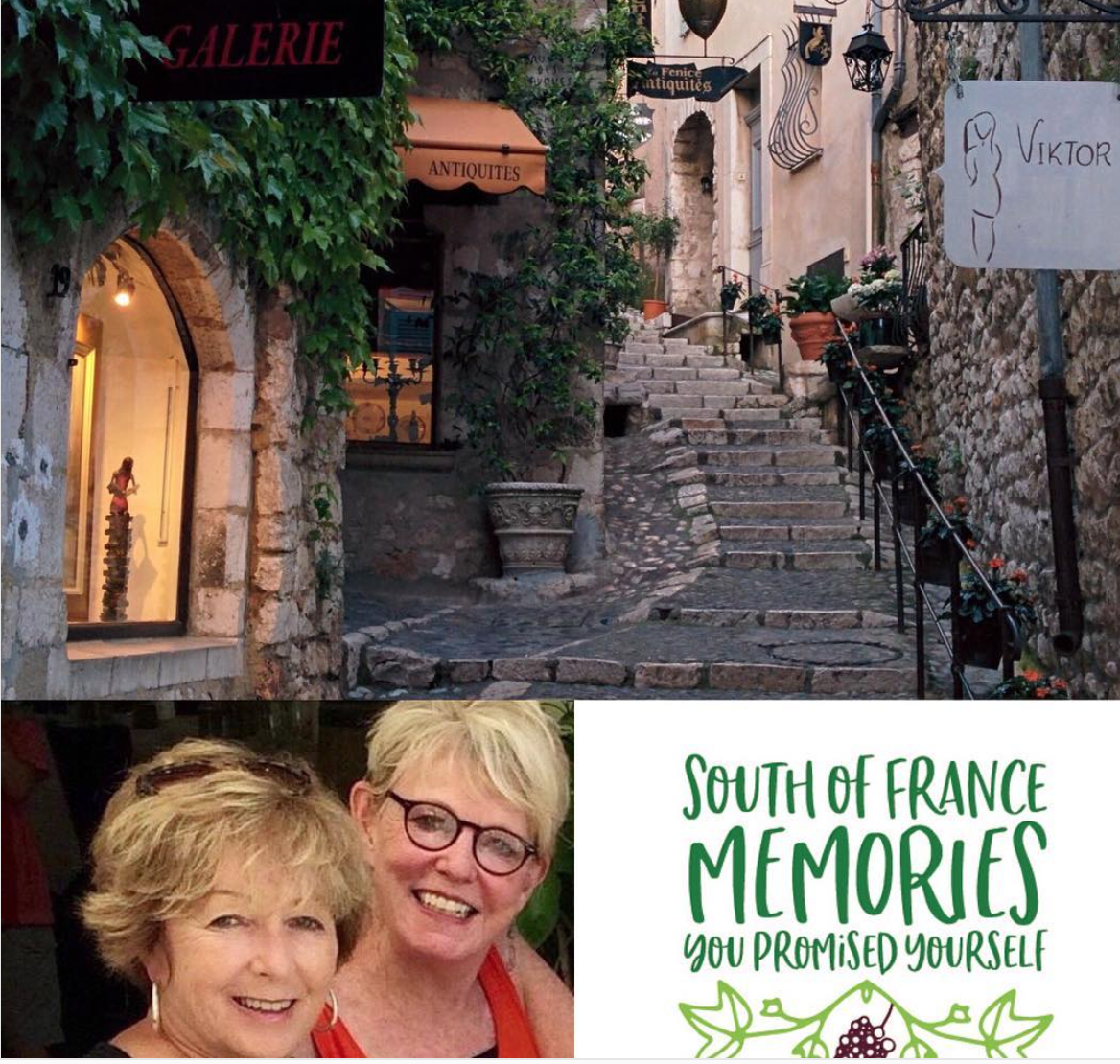 Come join us as we make some memories for a lifetime!

Talk about a good story! The literary history along the south coast of France is tough to match.

Poets and scribes from the Roman Empire told of the beauty of Antipolis, now Antibes. In later centuries writers began visiting the Riviera for the beauty, the sea,  the solitude or the company of other writers, as far back as the Italian poet Dante Alighieri  in the 13th century. Petrarch, John Milton and Michel Nostradamus were just some of the earlier men of letters who created their timeless works along this coast.

Tobias Smollett penned what is considered the first “travel” book for this area in 1763. Nietsche found inspiration in the 1880’s for some of his work as he walked the ancient donkey and goat paths here (see my earlier post). In the 1920’s F. Scott Fitzgerald was among those writers who ushered the Jazz Age to the area. In the 1980’s, Graham Greene wrote J’Accuse, opening up investigations into organized crime and politics in the area. Most came for inspiration. Others came to seek the fabulous weather and local colour, to gamble, to escape taxes or social ostracism.

The trend continues as witnessed by the “Local Authors” table in Heidi’s English Bookshop  from my post last Friday. I’ve already had the pleasure of meeting one of the writers in that group, Patty Knight from Boston. She writes under the pen name of Adora Bennett for Genesis Press and comes to Antibes for inspiration whenever it’s possible. I’m looking forward to meeting many of the others. Whether a writer with an established name or a fresh voice on the scene, the search for inspiration here is never ending.

Named for one of Antibes’ most revered sons , the Prix Jacques Audiberti de la Ville d’Antibes, worth 50,000 francs to the laureate,  honours a writer with a special interest in the Mediterranean.

Ted Jones, a British freelance writer, who lives in the south of France has written The French Riviera: A Literary Guide for Travellers. It’s an informed and entertaining book covering writers from  Graham Greene and W. Somerset Maugham who lived here,  to those writers whose work this area dominates, such as F. Scott Fitzgerald and Guy de Maupassant, to those who simply lingered there. His comprehensive work covers them all, including: Louisa M. Alcott, Hans Christian Andersen, J.G. Ballard, Simone de Beauvoir, Bertholt Brecht, Albert Camus, Casanova, Bruce Chatwin, Joseph Conrad, Charles Dickens, Vladimir Nabakov, T.S. Eliot, Andre Gide,  Ernest Hemingway, Gertrude Stein, Virginia Woolf, Victor Hugo, James Joyce,and countless others. Not only do you get the buzz on the authors and how they lived and were inspired here, it’s also an excellent travel guide to the area.

Albert Camus, who spent many years living in Le Cannett, once said: “Writers come here for the easy life but the beauty of the Côte inspires them to new literary heights!”

To experience the literary Riviera read what Ted Jones has to say and then go back to the books of these great authors.

We’ve rented a car for the day so better hit the road … so many places, so little time. I’ll save the Lunch and Lavender parts for next Friday.

What inspires you? Have you read many novels set on the Côte D’Azur? If you have a favourite, I would love to hear about it!